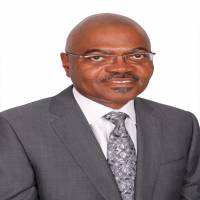 Mr. Ayo Shonibare is a Consultant Urologist and Kidney Transplant Surgeon with over 25 years experience gathered across several healthcare institutions in Nigeria and globally.
Mr. Shonibare qualified as a medical practitioner from the Royal College of Surgeons in Ireland in 1985.

Following his graduation, he underwent postgraduate training in surgery at various centers of excellence in the UK. He was awarded the Surgical Fellowship of the Royal College of Surgeons in 1991 and worked as a Surgical Registrar in Mount Vernon Hospital, Northwood, United Kingdom before returning to Nigeria in 1993.

He joined Saint Nicholas Hospital in 1993 as a Consultant Surgeon /Urologist and rose to the position of the Medical Director in 1995, a position which he held for four years , after which he left to set up his own urological center. As the Medical Director of Saint Nicholas Hospital he was directly responsible for organizing and overseeing clinical activities connected with the medical and paramedical management of the hospital.

He is currently Medical Director and Consultant Urologist at Vantage Medical Centre, a busy private urological practice in Victoria Island, Lagos. He is also visiting Consultant to many hospitals including Saint Nicholas Hospital, Lagos, Reddington Hospital, Lagos, and the University College Hospital, Ibadan.

He was a member of the team of Surgeons from Transplant Links UK that performed the first kidney transplant in Ghana in 2008 at Korle Bu Teaching Hospital Accra, and subsequently offered his support for ongoing training programs at the same institution. He is an International Society of Nephrology (ISN) Educational Ambassador. In this role he has trained local Surgeons on arterio-venous fistula at Doula General Hospital, Cameroon and Konkola Mine Hospital in Zambia.

He attended a Diploma course on Laparoscopic Surgery in July 2008 at the Laparoscopy Hospital in Delhi, India, a course on Minimal Access Urological Surgery at the famous Mansoura Institute of Urology and Transplantation, Egypt in 2009 and the Intensive Urology Laparoscopic course at the prestigious Laparoscopic Training Center in Strasbourg France, in June 2011. He also attended the Global Leadership Academy Program at the Cleveland Clinic Ohio, in April 2016.

Mr. Shonibare plays Golf, Lawn Tennis, Squash, Table Tennis and Chess, he also Swims and plays the Piano. He is an Alumnus of the Lagos Business School.
Mr Shonibare is currently involved as a lead promoter in the establishment of a world class multi specialty hospital, to be built in Lagos.