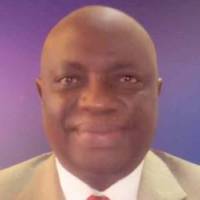 Professor Francis Abayomi Durosinmi-Etti (OFR)  graduated  from the College of Medicine, University of Lagos in June 1972.  He worked as a junior doctor at LUTH from where he proceeded to the Christie Hospital Manchester, (University of Manchester) England between 1975 and 1979 for his postgraduate training and qualifications in  Clinical Radiation Therapy and Oncology.

He had additional working experience as Registrar and Senior Registrar at other major Cancer specialist hospitals in the UK such as the Cookridge Hospital Leeds and Clatterbridge Hospital, Liverpool, England before returning home in 1980 where he was soon appointed a Lecturer Grade One at the College of Medicine University of Lagos and Consultant in Clinical Radiation therapy and Oncology  to LUTH.

Professor Durosinmi-Etti was appointed in 1988 by the United Nations, International Atomic Energy Agency (IAEA) in Vienna, Austria as a Radiotherapy Specialist charged with the overall worldwide activities of the IAEA in the field of Radiotherapy.  His activities included training, research and clinical treatment of cancer patients.  He held this position between 1988 and 1995 during which period he was largely instrumental to the development of the specialty in 45 developing countries of the world spanning Africa, Asia, Pacific, Eastern Europe and Latin America among several others.

Major Radiotherapy hospitals in some of the following countries still bear his influence especially in the areas of training and development of modern radiotherapy practices and facilities for the treatment of cancer: Nigeria, Ghana, Morocco, Zimbabwe, Namibia, Cameroon, Egypt, Tanzania, Uganda.  Others include Bolivia, Nicaragua, Panama, Peru, Pakistan, India, Poland, France, UK, etc.

He has several Academic publications to his credit in peer reviewed local and International journals.  He was also involved through the IAEA in the design and development of the AMRA brachytherapy machine in France and the CERVIFIX machine in  Italy.  These machines are used worldwide, including LUTH, ABUTH and National Hospital Abuja, for the treatment of cancer of the cervix in women.

Professor Durosinmi-Etti is certainly one of the best known Cancer experts of African origin in the world today.  He was the only black African on the pioneer Board of ICEDOC (an International cancer organisation), a foundation pillar behind the formation of the African Radiation Oncology Group (AFROG) which today receives support from the IAEA and WHO for the overall interest and benefit of Radiation Oncologists all over Africa . He was  Chairman of the MD Anderson Hospital, USA Organising Committee for their  yearly training programme in Oncology  in different countries in  Africa which started with a roundtable conference in Abuja, Nigeria  in October 2006..

On the home front, Professor Durosinmi-Etti is the first full Professor of  Radiation therapy and Oncology appointed by the University of Lagos or by any other University in Nigeria.

He has served Nigeria at various other levels including his position as the pioneer Chief Medical Director and Chief Executive Officer of the prestigious National Hospital, Abuja.

He is the current Chairman of the  National Consultative Committee on Cancer Control charged with the formulation of the National Cancer Control Policy  currently being implemented in  Nigeria.

He served as  the Technical Adviser to the International Cancer Centre Project, Airport Road,  Abuja which was established by H.E Hajia Turai Yar’Adua, former First Lady of the Federal Republic of Nigeria .

He is the Chairman of the Committee for the Interim registration of Clinical Medical Physicists in Nigeria.

He also served until July 2012  as the Chairman Governing Board of  the National Commission for Refugees and Internally Displaced Persons in Nigeria among other responsibilities.

He is happily married to Ibilola Durosinmi-Etti and they have many children and grandchildren.